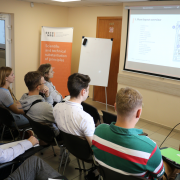 Reconstruction of Ukraine after the russian invasion is one of the key priorities today at the level of the international community. A number of countries have already announced their intention to join this process. Here we are talking not only about infrastructural facilities, but also about stimulating economic development and strengthening scientific potential.

One of the countries that supported the development of Ukrainian science even before the full-scale invasion is the United States of America. The U.S. Department of State and the U.S. Department of Energy through the Argonne National Laboratory (ANL) have launched and are successfully implementing a project aimed at popularizing the latest nuclear energy technologies among future nuclear engineers based on the State Scientific and Technical Center for Nuclear and Radiation Safety for the second year.

Argonne National Laboratory is the oldest research center of the U.S. Department of Energy. The main areas of the institution’s activities are development of the latest technologies in energy, research and solutions of the environmental pollution problems, conducting reviews in nuclear fuel cycle issues, and in addition, the laboratory conducts fundamental research in physics, biology, chemistry, etc.

ANL collaborates with universities, industry, and other U.S. national laboratories on issues and experiments too large for any one institution to perform alone. Thanks to cooperation with the best scientific institutions in the world, ANL strives to discover and implement energy innovations, “o create new materials molecule by molecule to better understand our planet, our climate and space”.

To consolidate and deepen the acquired knowledge, each of the program participants was asked to write a final paper on one of the selected topics, and based on the evaluation results, the Argonne National Laboratory will provide the best students with an opportunity to complete an internship. This year, the graduates of 2021 were supposed to visit the institution, but the full-scale invasion of the russian federation has changed the plans. However, as the curator of the educational project from ANL Olena Bodnar assures, students will still be able to visit the USA as soon as such an opportunity appears.

This year, in addition to the main program, scientists of the Argonne National Laboratory will deliver to the participants new lectures on the up-to-date hydrogen production technologies using nuclear energy, and will also get acquainted with the SMR GEN BWRX-300 technology based on a boiling reactor.

According to the decision of the organizers, last year’s graduates of the course are involved in the training: they are students of Kyiv Polytechnic Institute and Lviv Polytechnic University.

“We see great potential in the development of the Ukrainian energy industry and are interested to provide the possibility for young people who are getting specialized education to develop their knowledge of the latest technologies. Such projects are a great start and we are ready to continue them”, said ANL Project Manager Ihor Bodnar in his address to the students.

The first Phase of the Radiation Survey of the De-occupied Territories of Kyiv...

The Ministry of Health of Ukraine Purchased 12 more X-ray Machines with the...
Scroll to top