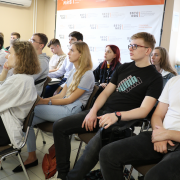 This week, participants of a specialized training course organized by the Argonne National Laboratory (ANL) talked with ANL scientist Richard Wilim about what hydrogen energy is and how it might relate to nuclear energy.

Currently, the entire humane world is directing its efforts to the development of low-carbon technologies to reduce the burden on the ecosystem as much as possible in the context of the struggle against climate change. The energy is considered clean when no significant amount of carbon dioxide is released during its generation. There are three methods of obtaining hydrogen, and two of them are low-carbon ones.

Scientists call hydrogen the fuel of the XXI century. Undoubted advantage is its unlimited raw material reserves. Hydrogen is the most common element, however, in nature it is in a bound state with other elements, for example, with oxygen in water, with carbon in methane. To obtain hydrogen, it is necessary to expend energy by breaking chemical bonds in hydrocarbons and water, thus releasing hydrogen from the reaction mixture.

As Richard Wilim points out, the majority of current hydrogen production in the U.S. amounts to about 10 million tons per year, compared to global production of about 90 million tons, by steam methane reforming from natural gas.

The most promising, but also the most energy-consuming, is method of obtaining hydrogen from water by electrolysis. To obtain a kilogram of hydrogen by this method, 35 kWh of electricity will be required. That is why the use of nuclear energy for the development of electrolysis technology solves one of the important issues that was the matter of concern for scientists for many decades.

Since nuclear energy is rightfully classified as low-carbon, the production of hydrogen with the help of nuclear power plants can justly be called ecological.

The U.S. Department of Energy (DoE) sees good prospects in the development of electrolysis technology, since, the availability of additional load, such as the electrolytic production of hydrogen, will ensure operation of nuclear power plants at a stable power level. Support programs launched in the country recently will help accelerate the progress of such production, reduce the cost of the technology and increase the use of hydrogen as a clean energy carrier, as well as will provide an opportunity to reduce the cost of pure hydrogen to 1 US dollar per 1 kilogram in ten years. This is currently the goal of the U.S. Department of Energy.

“Today, pilot projects for hydrogen production are being implemented at 4 or 5 nuclear power plants in the USA, but it is still too early to talk about large-scale industrial production”, says Richard Wilim.

In addition, hydrogen production is one of the functional capabilities of small modular reactors. Of course, their small power will not be able to replace other types of generation exclusively with hydrogen, but thanks to their modular design, ease of transportation and the ability to be installed in the most remote areas in a short time makes them potentially interesting for such purposes.

In general, the information provided by the specialist of the Argonne National Laboratory became really fresh and interesting for the students of the specialized training course. Participation in the project provided an opportunity to acquire new knowledge, and it is quite possible that among these 13 young men and women there are those who will develop such technologies in the future.