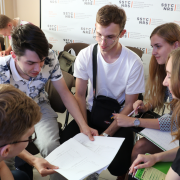 This week, in the framework of the Argonne National Laboratory project being implemented in the State Scientific and Technical Center for Nuclear and Radiation Safety (SSTC NRS), information on the small modular boiling water reactor BWRX-300 was presented and discussed.

Oksana Kuhotska, a specialist in the SSTC NRS Department of Neutron-Physical Processes, gave the audience a tour of the history of the BWRX-300 development and detailed all the features of this small modular reactor.

The 300 MW BWRX-300 is a scaled-down version of the designed GEH 1,520 MW ESBWR Boiling Water Reactor, which was successfully certified by the U.S. Nuclear Regulatory Commission (NRC) in 2014. The BWRX project uses the same design solutions as the ESBWR.

As the lecturer noted, the BWRX-300 type reactor requires up to 60% less capital expenditure per megawatt of capacity compared to other small reactor designs or current large capacity reactors. For General Electric, this is already the tenth boiling water reactor model, the company has been developing commercial nuclear reactors since 1955.

Like most boiling water reactors, the BWRX-300 uses low-pressure water to remove heat from the core. Unlike most nuclear reactors, which require electric pumps to actively cool the fuel, in this reactor design, water circulates inside the core through natural circulation. This system has advantages both in terms of simplicity and economy.

The BWRX-300 has a passive safety system, that is, neither external power supply nor operator actions will be required to maintain a safe state even under extreme conditions. Immediately after shutdown of a nuclear reactor, almost 7% of its previous operating capacity will continue to be produced by the decay of fission products with short half-live period. In traditional reactors, passive removal of decay heat is difficult due to low temperatures.

For students of a specialized training course from Argonne National Laboratory, this lecture was not only informative, but also valuable, because the graduation topics of several students were devoted to the small modular reactor BWRX-300. Currently, the graduation papers have already been completed, since their presentation and defense will take place today.