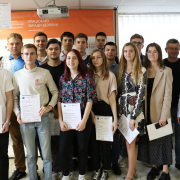 The second training course for students of Ukrainian polytechnic Universities with the major in nuclear engineering has been completed. The project, organized by the Argonne National Laboratory (ANL) with the support of the U.S. Department of State and the U.S. Department of Energy, was implemented during July in the State Scientific and Technical Center for Nuclear and Radiation Safety (SSTC NRS).

That was already the second specialized training in the framework of the joint project of the SSTC NRS and ANL, where Ukrainian and American scientists shared their experience and knowledge of small modular reactor technologies with Ukrainian students. The topic of the course was not chosen by chance, since exactly small modular reactors that are considered in the world as promising ones for introduction into the energy systems of countries, especially in their remote regions.

This year, in connection with the martial law in which Ukraine lives, all possible risks were taken into account, evacuation routes were worked out, and project participants were instructed on how to behave during air raids. There were no incidents during the project implementation, the lectures were held in a calm, relaxed atmosphere. In addition to the lectures themselves, practical tasks were carried out for the training course participants, where they practiced the acquired skills in determining, by parameters, the emergency states of NPPs.

The students themselves note openness of their lecturers, they say that the most valuable thing during the project was the support and constant communication, so everyone who had questions could get comprehensive answers to them.

During non-lecture time, there was a lot of discussions about the future of energy and the prospects that can open up for young people after completing their studies.

“This project was incredible. The only downside was that it ended so quickly. I would love to continue my studies with such teachers and among the like-minded people”, said Kateryna Haydachenko, a student of the Lviv Polytechnic Institute.

On the last day of training, project participants presented their final graduation theses, the topics of which were devoted to the most promising and most developed technologies of small modular reactors in the USA, such as SMR-160, NuScale, BWRX-300, Westinghouse and the AP-1000 high-power reactor technology, which currently is being considered for implementation at the third and fourth power units of the Khmelnytskyi NPP.

All the works were highly evaluated by the SSTC NRS and ANL specialists, and in confirmation, each student received a certificate of completion of the course.

“It’s hard for me to compare which course was a better one, but today you pleasantly surprised all of us. The works are prepared very well. I hope this training will be an impetus for your new researches. This year, among the lecturers, there were graduates of the previous course, and next year I will be happy to see one of you in our team”, said Dmytro Humenyuk, Head of the SSTC NRS Safety Analysis Unit, during the presentation of the certificates. ,

“Innovating to Provide the World with Reliable Low-Carbon Electricity” –...

Scientists from the Livermore National Laboratory Confirmed the Effect of Oxygen...
Scroll to top