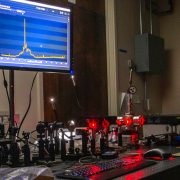 Scientists from the E. Lawrence Livermore National Laboratory and the University of Michigan discovered that the rate of cooling in the reactions dramatically affects the type of uranium molecules that are formed.

The research lasted for a year and a half, starting in October 2020, and was aimed at identifying uranium compounds that can form in the environment after a nuclear accident.

Uranium and oxygen can combine to form hundreds of different molecules, depending on the concentration of oxygen and the rate of cooling. Each of these species can have different and distinct chemical behaviors. That is why it is important to know exactly which molecules are formed as a result.

For their experiments, the scientists used a 6-by-6-inch bench-top reaction chamber designed by three researchers in the group: Mark Burton, Jonathan Crowhurst, and David Weiss. They fired a 50 mJ laser pulse to remove a square centimeter portion of a metallic uranium target, using in-situ infrared spectroscopy for diagnostics.

In their experiments, the scientists discovered that the rate of cooling and the amount of oxygen affect how uranium combines with oxygen. In particular, during cooling of uranium from a plasma at a temperature of about 10,000 degrees Celsius in microseconds (millionths of a second), the chemical processes differ from cooling in milliseconds (thousandths of a second).

Depending on the concentration of oxygen and the rate of cooling, the combination of uranium and oxygen forms hundreds of different molecules, each of which can have different and distinct chemical behavior. Therefore, it is important to know what molecules are formed as a result.

For the first time, an experiment on the effect of the amount of oxygen that combines with uranium on which uranium molecules are formed was conducted by E. Lawrence Livermore National Laboratory mechanical engineer Batikan Koroglu in 2020. These results were confirmed in studies of the E. Lawrence Livermore National Laboratory and the University of Michigan.

According to the Livermore National Laboratory named after E. Lawrence