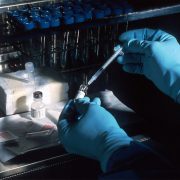 Researchers from Delft University of Technology have invented a new radiolabeling method for the efficient creation of nanocarriers with radioactive salts.

Radiolabeling can be used to diagnose cancer using SPECT or PET scans to determine where the radioactive particles enter the patient’s body and how many micelles are absorbed by the tumor.

Unlike chemotherapy, which has many side effects, nanocarriers made of so-called polymeric micelles are a promising and less toxic alternative to chemotherapy drugs. Micelles are tiny spheres that can carry substances inside their core. Using the radiolabeling method, scientists managed to load radioactive material into the core of the micelle.

The study demonstrates that radioactive indium (111In) is best used for radiolabeling imaging. However, scientists indicate that the micelles can be loaded with therapeutic radionuclides such as lutetium-177. In this way, the possibility of so-called theranostic treatment appears – a combination of diagnostics and therapy that can be applied to various tumors. In addition to clinical applications, the new method is also useful in medical research, for example, in the development of new drug carriers.

Scientists from the Livermore National Laboratory Confirmed the Effect of Oxygen...