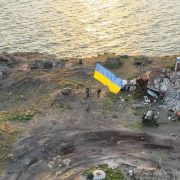 Ukraine was, is and will be independent!

Ukraine’s independence is in unity. In freedom and will. In the fight for the victory.

The independence is in the Ukrainian nightingale language, in the words of understanding, who belong to us, and who is a stranger. The words of which save lives and give hope for the future, make you laugh until your bones ache and cry without stopping. With the words of which they confess their love and add faith. Whose words inspire and support.

Ukraine’s independence is in various spaces. In the Ukrainian Carpathians and Crimean mountains, dense forests and vast steppes, in lakes and seas. In the blue endless sky, which will not be overshadowed by a single flying rocket, not a single black cloud from an explosion.

Its independence is in opportunities. No, Ukraine has not stopped developing, it does not live according to the USSR standards.

Its independence in the Ukrainian people. The most beautiful, the smartest, the most talented, the bravest… The best. People who cannot be defeated. People who will stand for their country and fellow citizens until the end. For freedom and will. For the right to live on their land according to their laws.

Scientists Invented a New Method of Diagnosing and Treating Cancer