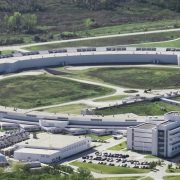 Argonne National Laboratory scientists started working on fast reactor fuel processing in the early 1960s during the development of the Experimental Breeder Reactor-II (EBR-II) and later as part of the Integrated Fast Reactor (IFR) program. Argon expanded the work that began with the EBR-II fast neutron reactor to develop pyrochemical processes for processing oxides, carbides, and other advanced fuels.

The IFR, a liquid-metal-cooled fast reactor, was designed to produce energy and consume waste, and while working on it, researchers implemented a pyroprocess in which an electrochemical reaction is used to separate the desired actinides from the unwanted fission products for recycling into new fuels.

The pyroprocessing process uses solid ceramic oxide pellets recovered from light water reactors (95% of which is uranium, 1% actinides of long-lived radioactive elements, and the rest unusable fission products) and converts the oxide components into metal. This metal is then immersed in a vat of molten salts, where, through electrorefining, an electric current selectively dissolves and re-separates the uranium and other reusable elements that are used to make fuel that can be used in fast reactors.

The 4% of fuel that is unusable fission products still needs to be disposed of in permanent storage, even though its radioactive toxicity returns to natural uranium levels over several hundred years. This is significantly less than the many millennia required to recover unprocessed nuclear fuel because most of the long-lived isotopes have been processed.

Today, LWRs remain the standard design for nuclear reactors in the United States, for which unprocessed uranium is a cheap and readily available fuel, but as fast reactors approach demonstration and, by the end of the decade, commercial deployment, reprocessed fuel may become the standard.

According to Argonne National Laboratory