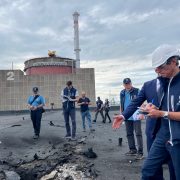 On 1 September, the IAEA mission arrived at the Zaporizhzhia nuclear power plant. Experts from Poland, Lithuania, Serbia, China, France and other countries were involved in the mission. The mission did not include representatives of Great Britain, USA and Russia.

A report describing the situation in Ukraine from 28 April to 5 September was published upon the visit to the Zaporizhzhia NPP. The russians violated seven indispensable pillars of nuclear safety and security outlined by the IAEA General Director at the Board of Governors meeting held on 2 March. The following problems were mentioned:

The IAEA mission to ZNPP observed the presence of russian military personnel, vehicles and equipment at various locations at the ZNPP and found out that there were no critical damage affecting plant radiation safety and radiation level was within established safety limits. Based on the mission results, the IAEA recommends that shelling on site and in its vicinity be stopped immediately to avoid any further damage to the plant and associated facilities for the safety of the operating staff and to maintain the physical integrity to support safe and secure operation.

Testing of the Vitrification Bublers at Hanford are over

For the first time, Robot Crawlers Will be Used in at Paducah Gaseous Diffusion...
Scroll to top