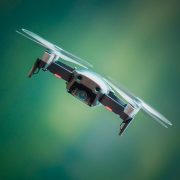 As part of the US Department of Energy’s (DOE’s) Office of Environmental Management (EM) Calcine Retrieval Project (CRP) at the Idaho National Laboratory, a light detection and ranging-equipped drone will be launched for the first time inside a high-level radioactive waste storage facility to map it.

Three CRP engineers have recently completed initial training on piloting at INTEC and then inside a more confined space within the facility as part of their training provided by the drone manufacturer.

The training served as initial practice for a complicated mission planned for later this year. Engineers will fly the drone inside a waste storage vault at INTEC that houses a set of four cylindrical bins, known as Bin Set 1, that contain 220 cubic meters of high-level radwaste known as calcine.

Calcine is a dry hard granular material similar to coarse sand. It is highly radioactive and is managed as a radioactive waste.

The waste will ultimately be transferred using pressurized air from Bin Set 1 to Bin Set 6. Once the Project is complete, data collected by the drone will be used to create a detailed map of the piping and other obstructions in the concrete storage facility to prepare for positioning waste removal equipment.

According to the US Department of Energy

For the first time, Robot Crawlers Will be Used in at Paducah Gaseous Diffusion...

300 meters to the Nuclear Reactors: the Pivdennoukrainska NPP Got under Fir...
Scroll to top