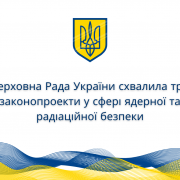 On 20 September the Verkhovna Rada of Ukraine considered and adopted three draft laws in the field of nuclear and radiation safety in accordance with the provisions of the European Union Directive.

In addition, the amendments concern the responsibilities of the licensees to engage only those contractors and sub-contractors who have the organizational structure, personnel and resources necessary to perform the specified works, in accordance with the requirements of the law, for the performance of works that affect safety during nuclear energy use. In addition, it was proposed to entrust the state nuclear and radiation safety regulatory body with functions related to organization of regular assessment of the legal framework in the field of nuclear energy use and the activities of the state nuclear and radiation safety regulatory body, for which international experts are invited. The proposed powers for the state nuclear and radiation safety regulatory body correspond to the practice of functioning of similar bodies of IAEA member-countries.

The next adopted draft law is No. 3869 “On Amendments to the Law of Ukraine “On the Nuclear Energy Use and Radiation Safety” in terms of the radiation protection expert”, developed with the aim of implementing into the Ukrainian regulatory framework the provisions of the Directive of the European Union on the establishing basic safety standards for protection against threats, caused by the ionizing radiation impact.

The draft law proposes to implement the specified Directive in terms of implementing the practice of consulting economic entities operating in the field of nuclear energy use, other legal entities and individuals, authorities on nuclear and radiation safety issues by radiation protection experts, whose competence is confirmed by the state nuclear and radiation safety regulatory body. Basic requirements for a person who intends to become a radiation protection expert, the body empowered to recognize an expert’s competence; main principles of the procedure for recognizing the competence of an expert are also defined. 295 Ukrainian Parliamentarians voted for the draft law.

The third approved draft law was No. 6425 “On Amendments to the Law of Ukraine “On Authorizing Activity in the Field of Nuclear Energy Use”, for which 272 Parliamentarians voted.

The draft law proposes to introduce the practice of preliminary notification of the state nuclear and radiation safety regulatory body by an economic activity entity on its intentions to carry out the activity before it starts. Such amendments are necessary to implement the provisions of the European Union Directive on establishing basic safety standards for protection against threats caused by exposure to ionizing radiation. The draft law also provides for the possibility of leaving an application for obtaining a license without review and determines the grounds for such a decision-making. In addition, amendments regarding the licensing procedure, in particular, regarding the terms of reviewing documents for obtaining a license were proposed.

300 meters to the Nuclear Reactors: the Pivdennoukrainska NPP Got under Fir...

New Methodologies of Assessing the Safety of Spent Nuclear Fuel Transport outside...
Scroll to top