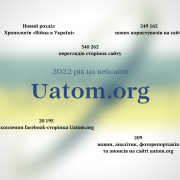 Uatom.org web-site was established on 30 September 2010 with support of the Swedish Radiation Safety Authority to increase the public awareness in issues relating to nuclear safety, radiation protection and non-proliferation of nuclear weapons.

Since 2010, the website editorial board has been publishing analytical material, articles and interviews, conducting population polls and participating in international and regional conferences. The Uatom.org editorial board developed information posters on radiotherapy used in medicine for cancer diagnostic and treatment for patients.

New sections were created and visual materials were prepared. In particular, the infographics “Types of Nuclear Power Reactors” was developed, and a platform (Blogs) for expert opinion in the field of nuclear and radiation safety appeared on the website where Mykola Shteinberg, ChNPP Ex-Chief Engineer, and Maksym Pyshnyy expressed their opinion on nuclear power in general and commercialization of Ukrainian NPPs.

For the first time, the State Scientific and Technical Center for Nuclear and Radiation Safety, together with the Uatom.org editorial board and assistance of the State Nuclear Regulatory Inspectorate of Ukraine and Swedish Radiation Safety Agency, translated the IAEA posters on radiation protection into Ukrainian.

Together with experts of the State Scientific and Technical Center for Nuclear and Radiation Safety, the Uatom.org editorial board organized the street action “Atom for Peace” and participated in the information campaign “Radiation Survey through Towns of Ukraine”. Also, two international initiatives – Inventory and Step to Safety – were implemented within the project.

From the moment of the full-scale invasion to Ukraine, the Uatom.org website editorial board continue to work on the topical content on nuclear and radiation safety. For example, the chronology “War in Ukraine” appeared on the website. This chronology includes data on the events in nuclear sector starting from 24 February. Also, iodine prophylaxis data (answers to the most common questions) were published. The statements of international organizations that support Ukraine and condemn russian federation actions were collected.

Twelve years have passed but the level of Uatom.org website popularity is getting high with years. Since the beginning of 2022, 249,162 new users have viewed 340,262 site pages and 20,195 people have posted on Facebook.

New Methodologies of Assessing the Safety of Spent Nuclear Fuel Transport outside...