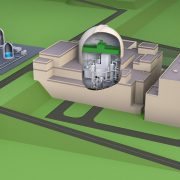 The SRZ-1200 is a 1200 MWe class advanced light water reactor designed on the basis of enhanced Japanese regulatory safety standards which incorporate lessons learned from the Fukushima Daiichi accident. The SRZ-1200 design complies with the regulatory requirements of “strengthening safety equipment” and “resistance to natural disaster and security against terrorism and unforeseen event”.

The name of SRZ has the following meaning:

New safety mechanisms include an advanced accumulator design and systems which effectively reduce the probability of radioactivity release in the event of a postulated accident and will limit any impact to the public and plant site.

Furthermore, the SRZ-1200 design is intended to enhance operational flexibility which will effectively allow for improved electrical power delivery alongside variable electric power sources such as renewables. The ability to adapt the SRZ-1200 for hydrogen production will also be studied.

MHI has been involved in the construction and maintenance of all of the 24 PWRs in Japan and has led the efforts to restart and ensure the safe operation of the existing nuclear power plants.

Mitsubishi Heavy Industries is intended to take SRZ-1200 conceptual design and proceed with the development.

According to Mitsubishi Heavy Industries

State Scientific and Technical Center for Nuclear and Radiation Safety to Continue...