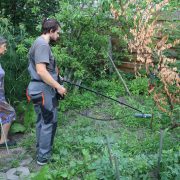 In October-November 2022, SSTC NRS experts, on behalf of the SNRIU, will continue radiation surveys of Kyiv Region territories that were temporarily occupied by Russian troops.

To the attention of the residents of Bucha, Makariv, Borodianka and Nemishaeve local communities!

If the occupational troops of the aggressor country were on the territory of your estate located within the Bucha district, we suggest you to submit a radiation survey request by filling the form following the link

Radiation survey applications will be accepted until 21 October 2022.

Anonymous applications and information posted in comments will not be considered.

Only demined areas and buildings will be the subject for radiation survey.

Radiation survey is performed by SSTC NRS in compliance with received applications and is free of charge for community residents.

The dates of radiation survey will be announced later.

Oleh Korikov: “The war has brought about changes in regulatory activities,...
Scroll to top