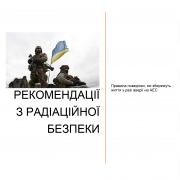 Nowadays, the topic of survival in war conditions is quite common and popular. The knowledge that can be obtained on specialized courses and during trainings will be useful, if not for direct application, then for share with other people. The more people know how to act under certain circumstances, the more lives will be saved.

In February, Ukraine became the only country in the world which nuclear facilities were seized as a result of the armed aggression. Zaporizhzhia NPP has been operated under extremely high risk for more than half a year.

The Ukrainian soldiers are at a risk, since they will have probably to perform the tasks in exposure area in the event of a nuclear accident. Considering this, the experts of the Emergency Preparedness and Radiation Monitoring Department of the State Scientific and Technical Center for Nuclear and Radiation Safety prepared, on the request of Ukrainian military sector, the recommendations on that how to protect yourself in the event of the accident at a nuclear power plant. The civilians also can follow these recommendations, however, when developing the recommendations, the main attention was paid to the conditions in which the military servants can find themselves.

Five information blocks contain comprehensive information on general issues related to radiation safety, personal safety, protection means, algorithm of actions in the event of an accident, as well as iodine prophylaxis which is hooped with myths already.

In compliance with the abovementioned data, the recommendations were developed for the military servants, but provided information will be useful for the people behind the front line.

You can find the document following the link.

Oleh Korikov: “The war has brought about changes in regulatory activities,...