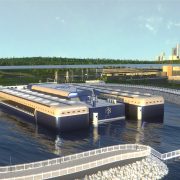 Prodigy’s SMR Marine Power Station™ (MPS) is able to house from 1 to as many as 12 NuScale Power Modules™ (NPM) for a total output of 924 MWe.

The design of the marine facility is standardized to ensure the deployment at different sites and full production.

The marine facility would be fixed in place within a protected harbor and connected to shoreside power supply systems. Nuclear fuel would be loaded in the NPMs as the last step of the commissioning process before beginning power generation. Operations, security, and fuel handling protocols are equivalent to those used for a traditional nuclear power plant under existing nuclear regulations.

At the end of its life, the marine facility would be transported to a marine-accessible center for decommissioning.

Prodigy is a Canadian company specializing in the development of Transportable Nuclear Power Plants (TNPPs). NuScale and Prodigy have been collaborating since 2018 under a Memorandum of Understanding (MOU) with the joint goal of bringing a competitive North American SMR marine facility to market – a product that can generate the electricity at any coastal location worldwide.