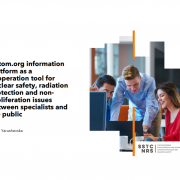 On 8-9 November, an online meeting of the Group was held to exchange information on technical assistance to Ukraine in the area of radiation safety and security, as part of the Group of Seven Initiative “Global Partnership against the Spread of Materials and Weapons of Mass Destruction”.

The initiative for information exchange is focused on presenting the results of ongoing projects and proposals for the implementation of future projects in the area of nuclear and radiation safety. At the meeting, there was a discussion of the issues and urgent needs for assistance that arose due to the full-scale invasion of Ukraine by the russian federation.

Immediately after the beginning of the military aggression of the russian federation, about 30 radiation monitoring groups were formed in regional disease control and prevention centers, which monitor air quality, in particular, radiation background, on a daily basis. Oleksii Danylenko, Head of the Public Health and Disease Prevention Directorate of the Ministry of Health of Ukraine, noted this. In addition, taking into account some gaps in legislation, the Ministry of Health has completed developing provisions on the health and well-being subsystem in the general civil protection system, which includes mechanisms for responding to all threats, including radiation ones.

The Deputy Head of the State Agency of Ukraine on Exclusion Zone Management Maksym Shevchuk shared information about the consequences of ChNPP occupation by the russian military, including the destruction of logistics and theft of specialized vehicles used to fight fires and transport radioactive waste, looting of radiological laboratories, destruction of equipment and computers. The most critical areas were selected for recovery, including demining exclusion zone territories, fire safety, monitoring of radiological situation and dose monitoring, purchasing computer and office equipment for enterprises in the exclusion zone, reconstruction of social infrastructure (restoring the bridge, repairing the system for replacement of gas energy carriers and return of normal working conditions for personnel), increasing the level of physical protection, restoration of the research and scientific infrastructure of the Chornobyl hub, restoration of radioactive waste management infrastructure.

Vladyslav Borzenkov, Energoatom Deputy Director on Physical Protection, reported on the situation at the Zaporizhzhia NPP, in particular, the presence of Russian military and rosatom workers, location of military equipment at the ZNPP site, damage of connecting power lines caused by artillery fire, and also reported that since the beginning of the full-scale invasion of Ukraine, more than a billion dollars of direct damage resulted from the destruction of buildings and equipment at the Zaporizhzhia NPP and other nuclear facilities. Modernization of the physical protection systems at Ukrainian nuclear power plants, including restoration of the safety systems at the Zaporizhzhia NPP after de-occupation, purchase and implementation of complex systems for detecting and neutralizing UAVs within the control areas turned out to be urgent needs for assistance.

In addition to the area of restoration and modernization of physical protection systems, the State Border Service of Ukraine declared the need to strengthen the ability of detecting and prohibiting illicit trafficking of nuclear and other radioactive materials at Ukrainian entry and exit points, green borders and administrative lines. In particular, Maksym Samusevych emphasized the importance of improving personnel qualification by relevant training on nuclear safety, training on responding to nuclear threats, combating illegal transfer of radioactive and nuclear materials across the state border, as well as providing employees of the State Border Service of Ukraine with the necessary off-road vehicles, surveillance and communication equipment. The possibility of developing a tool for risk analysis and statistics related to the trade in nuclear/radioactive materials was also stated.

The Uatom.org Editorial Board also presented the work of the project during the war and talked about the created topical content on nuclear and radiation safety. In particular, a new important section was introduced on the website: Chronology of Events in the Nuclear Industry during the War in Ukraine, where evidence of russian nuclear terrorism is collected since 24 February and up to today (the section is constantly updated with events in the nuclear industry). In order to increase the level of public awareness, the information was published on iodine prophylaxis, procedures in the event of a nuclear attack, recommendations of the Ministry of Health of Ukraine regarding actions in nuclear damage zones, recommendations on radiation safety for the military, possible radiation consequences of accidents at occupied radiation nuclear facilities of Ukraine and international organizations that supported Ukraine and condemned the actions of the russian federation. In addition, the Uatom.org Editorial Board conducted a survey for the public to check awareness of Ukrainians regarding nuclear weapons, actions during a nuclear attack, and iodine prophylaxis. Moreover, the website presents photo reports about the war in Ukraine, in which you can see shelling and bombing consequences, capture of the Chornobyl exclusion zone, occupation of the Zaporizhzhia NPP, looting of laboratories and theft of radiation sources, bombing the neutron source.

Best Inventions of 2022 in Energy Field
Scroll to top