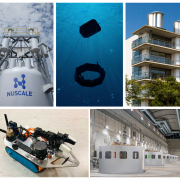 “This year saw a boom in innovation in the fast-moving world, so for the first time we’ve chosen the 200 best inventions of the year, paying special attention to areas of life that are evolving and gaining momentum, including the electric vehicle, clean energy and metaverse industries”, say the TIME editors.

The editors of the Uatom.org website made a selection of the best inventions in the field of energy:

The title was awarded for its high level of safety, modularity, maneuverability and low cost.

NuScale is the first and only small modular reactor whose design has been approved by the U.S. Nuclear Regulatory Commission. Instead of a traditional concrete dome installation, each NuScale module consists of a 23m-tall, 4.5m-diameter cylindrical reactor and containment vessel located in a water-filled, steel-lined pool underground.

The SMRs automatically shut down and cool down in the event of a power loss, and each one produces about 77 MW of electricity, enough to power 60,000 homes. By 2029, the company’s first power plant may be commissioned in Idaho.

The Lyra robot, developed by researchers at the University of Manchester, was used earlier this year to survey an underground radioactive ventilation duct at Dunray’s nuclear back-up laboratories. After traversing 140 m of duct, Lyra provided operators with detailed information on radiological characteristics, making the job much easier for humans.

Lyra is equipped with 5 radiation detectors, a laser scanner for positioning, 2 cameras, flashlights and a manipulator used to take radioactive contamination smears from the duct wall or floor.

Using robotics, it is possible to speed up the decommissioning of obsolete nuclear installations.

Unfortunately, the pioneer robot Lyra had to be disposed of after a successful examination at Dunray’s backup nuclear laboratories, as it had become contaminated with plutonium and other radioactive materials. The title was awarded for ecological response to climate disasters.

After floods, hurricanes and other natural disasters, and, as the war in Ukraine demonstrated, after hitting energy facilities, restoration of energy supply can take a much time.

Microgrids have already helped provide food, water, groceries, medical care, and enabled people affected by natural disasters to charge their devices, including after Hurricane Ida in Louisiana, tornadoes in Kentucky, and earthquakes in Puerto Rico, among others. After 14 years of construction, including laying of 17 km of underground tunnels, the Nant de Drance hydro-accumulating power plant became operational in July, aiming to stabilize Europe’s electricity supply while supporting the transition to renewable energy sources. Surplus electricity, including solar and wind, can be “stored” in the power plant’s two reservoirs; water moves between them through a steel pipe taller than the Eiffel Tower, driving six turbines some 600 m underground.

The largest hydro-accumulating power plant in Europe can store up to 20 million kilowatt-hours, which corresponds to the capacity of 400,000 car batteries. The potential of marine energy, also known as hydrokinetic energy, is enormous. Oscilla Power’s Triton wave energy converter has the unique ability to generate energy from all ocean motions.

The Triton is a high-performance multi-mode point shock absorber consisting of a geometrically optimized surface float connected to an annular vertically asymmetric support plate by three tensioned flexible links. Triton has a unique ability to generate power from all ocean motions, including heave, pitch, wave, roll and yaw. If you connect several generators, you can create a marine power system.

The system is powerful enough to withstand an 18-meter wave and can produce about the same kilowatts as an onshore wind turbine. A pilot project for the first commercial product will start later this year in Hawaii. Aeromine has created a wind energy system for large flat roofs consisting of bladeless units that are positioned along the edge of the building in the direction of prevailing winds to generate electricity.

This technology is not yet available for commercial use, although the company claims that one of their systems can generate up to 50% more energy than a rooftop solar panel. According to the “TIME” publication

Current and Future Projects in Nuclear Safety and Security