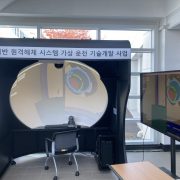 A research team headed by Dr. Jung-Soo, Chief Researcher of the Pusan Mechanical Engineering Research Center of the Korea Institute of Machinery and Materials developed a simulator that allows operators to simulate underwater laser and plasma cutting and work with equipment in conditions similar to the actual NPP decommissioning environment, by virtualizing the remote nuclear dismantling system.

The virtual remote dismantling system was developed to decommission the Kori-1 power unit of the Japanese nuclear power plant of the same name and to implement working environments for decommissioning.

Researchers developed a remote cutting modeling algorithm for an underwater robot and virtualized radiological elements based on the dynamic analysis. A physical environment for underwater cutting was also created with the development of an optimal scenario for the dismantling process, taking into account the image of the reactor internals and radioactivity during cutting.

The simulator, recently developed by the research team, displays on its screen a picture of the robot for underwater cutting and the cut image that occurs during underwater laser and plasma cutting. This is a simulator that implements a physical phenomenon in practice, taking into account the virtualization of radiological elements and allows remote training of dismantling operators.

According to the Korea Institute of Machinery and Materials

Best Inventions of 2022 in Energy Field