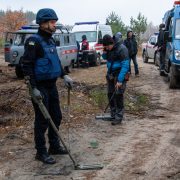 On 16 November 2022, SSTC NRS experts as crew members of the RanidSONNI mobile radiological laboratory conducted radiological survey in the Nemishaieve territorial community within the SURVEY project.

The survey was carried out with the aim of detecting radioactive contamination and radioactive materials that could be taken by the occupiers beyond the exclusion zone in violation of the radiation safety rules. The radiological survey covered the places where the russian troops stayed between the villages of Mykulichi and Myrotske in the Bucha district of the Kyiv region and the territory of the park and streets in the village of Klavdievo-Tarasove according to the application from residents.

Representatives of the territorial unit of the State Emergency Service of Ukraine were involved to ensure safety of the SSTC NRS experts, who inspected locations of the radiological survey and neutralized the discovered explosive objects.

According to the radiological survey of the Nemishaieve territorial community, no radioactive contamination that could be related to the occupiers’ activities was detected. No increase in the ambient equivalent dose of gamma radiation (EDR) was found on the surveyed territories. The EDR values measured through the vehicle gamma survey and manually were up to 0.12 μSv/h, which corresponds to the background values typical of the area.

Educational material on radiation safety will later be distributed among residents of the Nemishaieve territorial community.

The radiological survey activities are carried out within the SURVEY project, which is intended to identify and reduce the risks of exposure to the public that is caused by contact with radiation sources/radioactive contamination and to reduce the public’s anxiety caused by imaginary risks associated with the presence of occupiers in the exclusion zone.