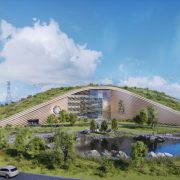 The UK’s First Light Fusion plans to build a 60 MW pilot power plant based on its unique projectile fusion technology to prove the integrated engineering for electricity generation and the production of tritium, which will facilitate the faster deployment of commercial fusion power.

The proposed pilot plant is expected to cost about USD 570 million to develop and will produce about 2 kilograms of excess tritium per year.

One of the key features of deuterium-tritium fueled fusion power plant designs is the ability to purposely produce tritium in the reactor, which is then used as reactor fuel.

First Light’s inertial confinement approach aims to create the extreme temperatures and pressures required for fusion. The company said its “liquid lithium wall” approach, inside the reactor chamber where the fusion reaction will take place, gives it an inherent advantage in tritium production. The fusion reaction is surrounded by liquid lithium, allowing tritium self-sufficiency to be easily reached, and making it possible to design for excess tritium production.

The company will collaborate with Canadian Nuclear Laboratories (CNL) to design a system for extracting tritium from the reactor.

Under the agreement, CNL will choose two major tritium extraction candidate techniques on which system size and tritium inventory calculations, and assessments of safety and technological risks, will be performed.

The tritium extraction system represents an essential part of tritium control in a fusion fuel cycle, and is a key factor in harvesting the tritium and limiting tritium permeation into the coolant.

First Light Fusion believes that accelerating the construction of a small pilot facility that provides a stable supply of tritium will stimulate faster deployment of fusion power.