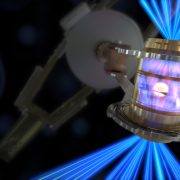 LLNL’s experiment surpassed the fusion threshold by delivering 2.05 megajoules (MJ) of energy to the target, resulting in 3.15 MJ of fusion energy output, demonstrating for the first time a most fundamental science basis for inertial fusion energy (IFE).

The goal of fusion studies is to replicate the nuclear reaction that produces energy on the sun. Fusion is the collision of two atoms at incredibly high velocities and transformation of this reaction energy into electricity that can power homes and offices without carbon emissions and radioactive waste.

Since the 1950s, scientists experimented with fusion reactions, but so far, they have not succeeded in creating one that produces more energy than it consumes.

Achieving a net energy gain required the use of one of the largest lasers in the world. Laser thermonuclear fusion is one of the areas in the studies of US scientists towards achieving controlled thermonuclear fusion based on the laser ability to concentrate energy in small volume of matter in short periods using the inertial confinement of the plasma.

Enormous resources are needed to convert thermonuclear fusion into electricity. Firstly, it is a technique capable of converting a thermonuclear fusion reaction into electricity at an affordable price. Secondly, difficult-to-produce materials will be required to manufacture devices. Thirdly, neutrons are produced during the reaction, which cause a huge load on the equipment, and during the reaction it can be destroyed.

According to the Lawrence Livermore National Laboratory