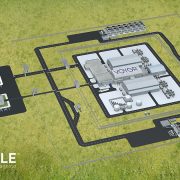 The current environment in which the energy sector has to operate makes not only operating organisations but also technology developers adapt to new realities. As never before, the safety of nuclear facilities depends not only on design features, but also on external factors, because together with the invasion of the russian federation in Ukraine and the capture of sites with nuclear facilities, the concept of safety was wiped out and all the knowledge that existed until now turned out to be insufficient. NPP projects that were implemented in the last century are losing their attractiveness due to more reliable and safer competitors, especially in the current circumstances.

One of the most developed nuclear technologies now is the small modular reactor technology by NuScale Power from the US. Although the company is quite young, founded in 2007, it has already achieved significant results in its work.

At the heart of the company is research funded by the US Department of Energy in the early 2000s at the University of Oregon, Idaho National Laboratory and several other organisations. The university’s School of Nuclear Science and Engineering was developing, in particular, passive methods of water circulation for cooling at nuclear power plants. In 2007, graduates of the school founded NuScale Power.

As early as in 2008, NuScale applied to the US nuclear regulator (NRC) with the intention to certify the design of a passively cooled light water modular reactor using traditional steam turbine technology. As noted in the application, the 45 MW reactor can be operated as a standalone unit or as part of a multi-module plant. The reactor vessel is compact and can be transported on a typical lorry. The only difference between the fuel for the NuScale reactor and the one that was used in existing light water reactors was the length of the assembly for NuScale — only 2 metres.

In 2013, after having enlisted the financial support from the US Department of Energy, the company announced the launch of a demonstration project of 12 modular reactors in Idaho, with a total capacity of 600 MW.

In December 2016, the 50 MW project was submitted to the US regulator for safety certification.

In January 2018, the 50 MW project passed the first phase of certification, and the NRC published the Safety Evaluation Report (SER). It concluded that NuScale’s new safety design approach eliminates the need for Class 1E power supply.

Class 1E is the regulatory standard for designing electrical systems of all nuclear plants, but the NRC confirmed NuScale’s Licensing Topic Report “Safety Classification of Passive Nuclear Power Plants Electrical Systems”, in which the company determined that the safety systems of its project are not dependent on and are not related to the power supply at all. Passive safety systems do not require AC or DC power and therefore provide full resilience to power outages. In the absence of power, NuScale reactors will shut down without operator or computer intervention and remain “cold” indefinitely, without the need to add water. The fuel in the fuel pool will remain cold for five months also without adding water. Extreme weather impacts will not be a safety hazard.

The second and third phases of the project review (the Safety Assessment Report and the Advisory Committee on Reactor Safeguards, ACRS report) were successful. In December 2019, the Commission completed the fourth phase of the project review with the extended Safety Evaluation Report (SER).

In the next, fifth phase, the ACRS was to issue an interim safety report. The fifth phase was expected to be completed as scheduled on June 23, 2020, but the developer company needed some time to address critical comments.

On August 28, 2020, the NuScale SMR became the first to receive a Final Safety Evaluation Report (FSER) from the NRC as part of Phase 6 review — the last and final phase — of the NuScale Design Certification Application (DCA). The approval of the Safety Analysis Report by the nuclear regulator actually means the completion of the review and approval stage of the SMR construction project. Thus, the project is fully ready, and all safety aspects have been approved by the NRC. In the summer this year, the U.S. Nuclear Regulatory Commission announced that NuScale has been issued a design certification for the 50 MW SMR, which means that the design meets the applicable safety standards.

The certification of NuScale SMR design is a milestone for the NRC. Since the Nuclear Energy Innovation and Modernization Act (NEIMA) was passed by the US Congress in January 2019, the regulatory body has been preparing to regulate a new generation of reactors. NRC officials said that the key mission was to transform the regulatory framework for advanced reactors into a “modern risk-informed technology approach.”

And finally, this month NuScale Power completed engineering a nuclear power plant based on SMR technology, the VOYGR, which is going to become commercial. Each module will have a capacity of 77 MW. The company offers a 12-module VOYGR-12 (924 MW), a four-module VOYGR-4 (308 MW) and a six-module VOYGR-6 (462 MW) power plant, and is also ready to consider other configurations depending on customer needs.

Small Modular Reactors May Become an Alternative to TPPs